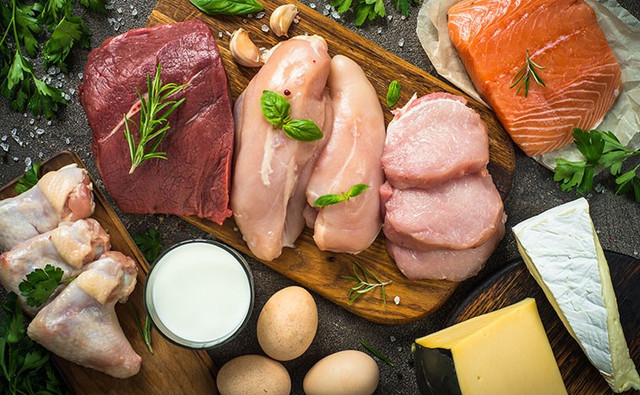 If you're a little too fluffy, you're probably overeating carbs and fats instead of emphasizing protein and eating with intention. As your metabolic health deteriorates, the situation worsens. What is the solution? Make protein a top priority.

THE PROTEIN TEST
The simplest approach to tell the difference between a food need and true hunger is to check your protein levels. You're truly hungry if you're willing to eat only pure protein (chicken, steak, fish, or a protein drink). If a pure protein meal doesn't appeal to you, you aren't actually hungry. You're bored, upset, or simply have a craving.

Everyone can benefit from the Protein Test. It's one of the most efficient techniques to avoid overeating and develop a healthier connection with food.

Protein for Gains and Shredding
You must prioritize protein whether you want to get shredded or "lean bulk": If you want to lose weight, stick to a calorie deficit and consume 1 gram of protein per pound of bodyweight.

Eat a 5-10% caloric surplus and aim to get all of the surplus calories from protein if your primary goal is to grow muscle while minimizing fat gain.

Most people believe that eating in excess while consuming high carb (50 percent of daily calories), moderate protein (0.75 to 1 gram of protein per pound of body weight), and low fat is the greatest approach to bulk up.

While this formula works well for younger lifters, it may not be the best option for everyone, especially those who want to undertake a genuine "lean bulk" - a slower mass phase in which muscle gains outnumber body fat and water retention. A calorie surplus is still required. Rather than acquiring those extra calories from carbohydrates and lipids, acquire them from protein.

Protein overfeeding has been proven effective in numerous studies. Two groups of resistance-trained ladies were studied in one study:

One group cut their protein intake to 0.5 grams per pound of body weight and cut their daily calorie consumption by 300 calories.

The other group ate a 250-calorie excess for 8 weeks while increasing their protein consumption to 1.25 grams per pound of bodyweight.

Females who had a high-protein resistance training program lost 2% body fat, while those who had a low-protein resistance training program lost only 1% body fat. Remember that the high-protein group consumed more total daily calories and shed more body fat than the low-protein group. That's extremely impressive.

I used to believe that if you ate too many calories, you'd gain weight. This is still true in general, but these women were resistance exercising while on a protein-only caloric surplus. So, if you lift weights and eat more protein, you won't acquire fat (as long as your surplus is reasonable), but you will lose fat and grow muscle.

In another study, individuals were overfed by 1000 calories per day for 8 weeks. The subjects were not obese, but they were overweight and did not exercise. One of the groups consumed only 47 grams of protein per day. The other group consumed 228 grams of protein on a daily basis.

If we're going to overeat on purpose, we should overeat protein, according to this study. This is supported by other research.

More Reasons to Make Protein a Priority
• When dieting, protein aids in the preservation of muscle mass.
• Protein raises your resting metabolic rate, allowing you to burn more calories even when you're not doing anything.
• Protein boosts your metabolism. Protein has the highest thermic effect (TEF), which means that it burns more calories and takes more energy to digest than carbs or fats.
• Protein is incredibly satiating and keeps you full for a longer period of time. It's not a bad problem to have when you're trying to lose weight!

V.I.P.
protein should be the #1 item on any bodybuilder list

V.I.P.
napsgear, yea protein is the blood of our sport

V.I.P.
naps
protein is the uno thing we need to grow agreed

VIP Moderator
protein is in all my meals too

Member
Very good article.
You must log in or register to reply here.

L
What should I eat to gain muscle

Today at 7:41 AM
richardbrown

Napsgear: How To Track Alcohol For Macros