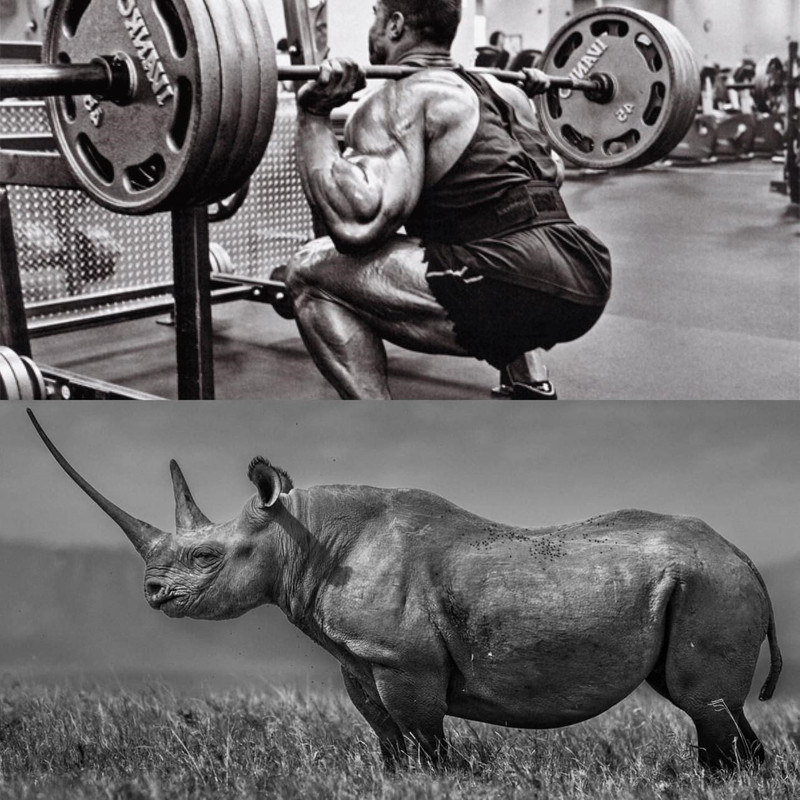 Where do strength and size have their upper limits?

In the field of fitness and strength sports, we're living in an exciting moment. Lifting and participating in strength sports is becoming increasingly popular, and we're seeing more and more athletes achieve feats of strength that were once thought impossible.
But why is this the case? As strength sports become more popular, so does the talent pool of players and coaches — and this, in turn, leads to an increase in research, such as in the field of muscle fibers.
Researchers investigated muscle fiber type and morphology (how the form changes over time) in a middle-aged professional powerlifter using anabolic steroids in a case study published by California State University Fullerton's College of Health & Social Sciences. The goal of this case study was to see how muscle fibers adapt and alter throughout the course of an athlete's career when using anabolic drugs and intensive resistance training.
This case study has generated a slew of fresh questions and recommendations for future research. For example, this case study discovered a fast-twitch muscle fiber in the individual that was over 20% larger than a rhinoceros' regular muscle fiber – wait...what?
They discovered one fiber that was much larger than the rest.
We know that strong athletes have a lot of rapid twitch muscle fibers, but discovering one that's bigger than a rhinoceros' is incredible. The researchers examined 250 individual muscle fibers from an exceptional powerlifter's resting vastus lateralis (outer quad muscle).

The breakdown of muscle fibers in the powerlifter's body was as follows:
• Type I Fiber (slow twitch) accounts for 9 percent of total fiber and is important in endurance sports.
• 12 percent Tyle I/IIa Fiber (slow-fast twitch hybrid) — Helps with endurance, strength, and power.
• 79 percent Type IIa Fiber (fast twitch) — Play an important part in strength and power sports.
The presence of 79 percent type IIa muscle fibers is astounding. To put this in perspective, this is one of the highest percentages of type IIa fibers ever documented in studies, and it's nearly 2x what competitive powerlifters have.
The elite powerlifter's muscle fiber cross sectional area was actually similar on average to what is normally observed in healthy men, but his fibers had a larger myonuclear domain size (which is used to help predict a muscle fiber's oxidative capacity), in addition to having some of the highest ever recorded type IIa fast twitch muscle fiber percentages in the literature. This increase in the myonuclear domain indicates that an elite powerlifter has around >2x the number of myonuclei (per volume) as an untrained, healthy male.
The elite powerlifter's muscular fibers have a far better potential and ceiling for growth and recuperation, with 2x+ the amount of myonuclei per volume.

The Case Study
This case study gives us a glimpse of human muscle physiology's upper limits in terms of hypertrophy and strength. While the muscles of amateur powerlifters and bodybuilders have been studied and profiled for decades, this is the first study that we are aware of that was able to obtain a muscle fiber type and single fiber microscope images from a truly elite powerlifter (combined max squat, deadlift, and bench >2,600 lbs).
However, some outcomes were anticipated. For example, this athlete's fast twitch muscle fibers (also known as Myosin Heavy Chain (MHC IIa) fibers) were 79 percent pure. This is significantly higher than the average adult, but equivalent to the elite Olympic weightlifters studied. The researchers also discovered that his average "myonuclear domain size" (the region under the control of each myonuclei) was lower than typical. This was also expected, given this athlete's growth and repair responses are likely to be better due to intensive resistance training and anabolic steroid use.
They did, however, uncover some surprising findings. The fibers of this athlete were on average the same size or smaller than those of normal adults. To account for his bigger total muscle mass, he appears to have more total fibers per muscle than ordinary people. However, some of his strands were unusually large.
Most researchers believe this is the largest human fiber they've ever seen. However, we don't know why some fibers are so large; it could be due to exercise, performance-enhancing substances, heredity, or food. Or, more than likely, a mix of these things.

Future Research
Muscle physiologists have been studying "recreationally active young people" for almost 50 years. Why? Because universities are where the majority of research takes place. We recruit subjects from this area, and the majority of persons in the area are "recreationally active young people."
Subjects for research studies, especially elite athletes, are extremely difficult to come by. Athletes and coaches, on the other hand, are becoming increasingly receptive to the concept of participating in muscle research. Now they are recognizing the value of this information for themselves, their sport, and the scientific community. Hopefully this research on this elite powerlifter may pique interest in collaboration across the sports and science realms.

Takeaways
To begin with, it should come as no surprise that long-term (decades) resistance training plus anabolic steroid use can make you extremely large and powerful. What we demonstrated, on the other hand, was more detailed information on what's going on at the cellular and molecular levels: this elite powerlifter had:
• A higher capacity for repair and growth
• A bigger number of fast-twitch fibers
• Some very large fibers (mixed in with mostly average sized fibers)
The researchers were extremely fortunate to obtain a muscle sample from an elite male powerlifter who had used anabolic steroids for 15 years. While this one sample merely provides a snapshot of this athlete's physiology, data from elite strength athletes is extremely rare.
The majority of athlete study has previously focused on endurance athletes. Why? Because the majority of scholars back then were also endurance athletes!
However, we now have a large number of strength/power athletes who have also been trained as "athlete scientists." This, together with the rising popularity of weightlifting and makes us believe that now is the best moment to collect reliable muscle fiber data on these groups. With the goal of better understanding muscle growth and performance, this data shows a little piece of a broader jigsaw.

VIP Moderator
a lot of this info is golden, thank you

V.I.P.
naps has the best articles

VIP Moderator
Deffo worth a read.

Member
Great article!
You must log in or register to reply here.

How do Anabolic Steroids work?