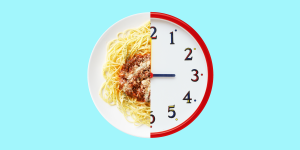 There’s been a myth going around for years and years that eating carbs at night will make you fat. Well today I’m telling you its just that: a myth. Eating at night in general has been associated with weight gain, you hear advice such as “don’t eat after 7:00 pm” all too often.

Fact of the matter is, fat gain all comes down to how many calories you consume vs calories burned. If you are eating within your energy budget (energy being calories), you will not gain weight! You’ve probably seen examples of poor diets consumed by doctors to prove a point: eating the right number of calories, no matter what the food breakdown is like, won’t lead to weight gain. In a self-study, Mark Haub ate mainly Twinkies and Doritos for 10 weeks, and lost 27 pounds doing it. Before the study, he was regularly eating 2600 calories, and when the study started, he reduced his intake to 1800 calories.

This is just one example of people doing extreme diets to prove that weight loss is based on calories in vs calories out and not the quality of the food.

The Twinkie and Dorito diet’s macros were heavily carbs and fats, but the sentiment is the same for all 3 macros: protein, carbs, or fat, your body simply won’t gain weight at night unless you’re eating above your macros! This isn’t a promotion to not eat a well-balanced diet or active lifestyle. But it does open your mind to this new flexibility of being able to have a twinkie after 7:00.

It’s also worth noting that everyone is different, individual factors like metabolism, hormones, or insulin level an all play a role in how your body processes and stores carbs. And if you are regularly consuming carbs high in added sugars, it actually can have a negative impact on your weight in the long run, mostly because of the changes in insulin levels.

There’s a theory that eating carbs closer to bedtime means that you’ll have less time to “burn” them off (meaning that otherwise the carbs will convert t fat as you sleep). Again, another big fat myth. While carbs are converted into glucose for energy, and some get stored in your liver and muscles as glycogen. Excess glucose (sugar that your body can’t use right away or convert into glycogen) can be stored as fat.

But that’s not a carb problem, but a math problem. Again, it all boils down to calories in vs calories out, and carbs make up some of those calories. Refined carbs like added sugars, sweets, etc. tend to have higher calories than complex carbs (like oatmeal, lentils) or fruit.

Ultimately, as long as you are staying within your recommended calorie range, you won’t gain weight from eating carbs at night. But you still should aim for a balanced diet (a good rule of thumb is 80% nutrient dense food, 20% fun food) and an active lifestyle in order to maintain hormone and insulin levels over both short-term and long-term. So if you want that Twinkie tonight, go for it!

VIP Moderator
This is an interesting article and can be approached several ways. i think it is best though to not go to sleep on a full belly, you should try to evacuate before bed.

VIP Moderator
I prefer to let my body focus on healing and recovery vs digestion. I am also not the guy trying to pack on muscle so different goals.

How to Fuel Up Before a Workout