Have any of you guys tried out DMHA?

Supposedly it's the new and better version of DMAA. I love me some DMAA so this sounds right up my alley. A company close to me that sells nootropics is carrying it and I think I may just have to purchase a few grams.

Check out this good write up if you haven't heard of DMHA before...
https://www.linkedin.com/pulse/new-dmaa-dmha-2-aminoisoheptane-octodrine-cain-yang

"In the wake of the removal of other popular stimulants over the past few years, a battle has raged to fill the void left by the ingredients now gone. The supplement industry is still struggling to replace DMAA, whose fate will be decided in court this year and currently only Hi-Tech Pharmaceuticals is selling.

Today we look at the latest stimulant, initially (yet incorrectly) labeled as 2-aminoisoheptane. It definitely looks like the “next big thing” in 2016.

Where does this ingredient fit into this new era of stimulants, and how does it work?


TL;DRThis is actually a set of two different DMAA-like stimulants that we consider to be ~90% the effects of DMAA at appropriate doses.

They works in the same fashion: by boosting dopamine and noradrenaline uptake, while slowing down reuptake just long enough for a solid workout or study session.


There two versions are named2-amino-6-methylheptane, and2-amino-5-methylheptaneThis article primarily focuses on the first one (with a 6, or ‘hex’).

We’re officially calling it DMHA for short here (as proposed by Bruce Kneller of Giant Sports).

You’ll also see it as 2-Aminoisoheptane, but that is a vague name that doesn’t distinguish which of the above two compounds you’re getting. Other names are Octodrine, 2-amino-6-methylheptane, 6-methylheptan-2-amine, and 1,5-Dimethylhexylamine (hence DMHA).

The DMHA version feels terrific but isn’t overwhelming. We expect to see doses ranging from 50mg-250mg, but won’t be going any higher than that in a 24 hour period. Read our early review here."

Sent from my SM-N920V using Tapatalk

I ordered up 5 grams of this stuff.

I'll let you guys know if I die. Well maybe I won't, but I'll definitely let you know if I don't die.

Sent from my SM-N920V using Tapatalk

Sent from my SM-G935F using Tapatalk 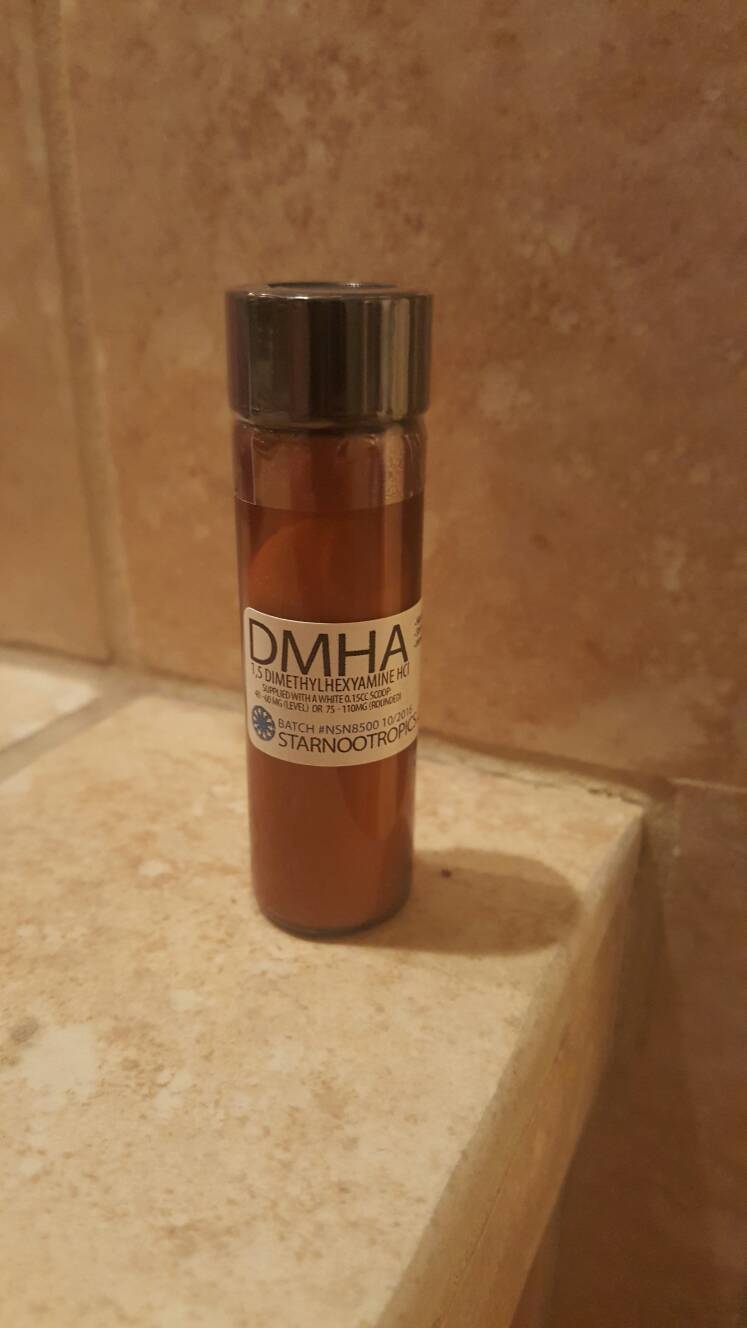 Super Moderator
i'll pass on that... dmaa did nothing but destroy my stomach etc... all of these are not good, flat out regardless of how they are marketed... you can always try it and find out for yourself but i certainly wont be trying them out... i never felt pre workouts to be necessary after i stopped using them and realized they really hindered me far more than helped...

It's certainly different for every person. I love DMAA. I can't use most of these crazy preworkouts because of the extreme caffeine content. I like how DMAA gives me a clean rush and fades out slowly without crashing. I like to mix in a little DMAA with my BCAAs every now and then.

I'll let you guys know how the DMHA treats me.

Super Moderator
yes bro, to each their own...

VIP Moderator
I do miss DMAA. I loved the stuff, and never had anything negative from it. I'm interested in hearing what you think of this DMHA

I like to use Jack'd Up by Hi-Tech for my DMAA fix. Problem with that is that there is so much other caffeine in it that I can't use too much.

DMAA doesn't seem to be any more dangerous than these energy drinks with absurd amounts of sugar and caffeine amongst other junk. Anyone with preexisting conditions such as hypertension or heart issues should definitely steer clear. From what I've gathered, the deaths that have been attributed to DMAA have been caused by significant amounts of DMAA combined with over exhaustion. People have died from Red Bull as well. All things in moderation.

Jdmz25 said:
Is it safer than dmaa I heard dmaa is pretty dangerous and can cause heart attack
Click to expand...

It doesn't do any of that shit. Just like ephedra, if it is abused and taken at absurd doses it is going to cause problems. That goes for pretty much anything

The only case I've heard of with DMAA was a KID with a heart condition.
I would only warn people about taking DMAA with adderall or amphetamines because they work very similarly and at least for me it causes a hard crash in dopamine and norepinephrine the next day if I take enough.

And I would say DMAA causes less heart issues than caffeine personally. I don't get rapid heart beat with DMAA like I do with lots of caffeine b

JackSteel said:
And I would say DMAA causes less heart issues than caffeine personally. I don't get rapid heart beat with DMAA like I do with lots of caffeine b

Yep.
DMAA has a very synergistic effect when combined with caffeine. You take too much caffeine with it and you're bound to have a bad time.

So...
I gave the DMHA a go today. I mixed about 80mg in with some BCAA's preworkout. I left out any kind of caffeine or other stimulants so I can get a feel for the DMHA by itself.

It was certainly very similar to DMAA. Not quite the punch, but it was definitely there. I didn't feel any sudden rush or anything like that. I took it about 30 minutes prior to the gym. I got in the gym and started my workout as usual, nothing out of the ordinary. About 30 minutes into my workout I started noticing that I kept doing extra sets without even thinking about it and my rest periods were shorter than usual. I wasn't jacked up or anything. Just a very clean, strong focus. I just wanted to keep going. An hour flew by like it was nothing. I finished my workout with some high rep pump work and it sure hit the spot. I honestly haven't had this good of a workout in a while.

I had zero negative side effects. No jitters, racing heartbeat or stomach issues. I feel completely normal, just more in the zone. I would definitely recommend DMHA to anyone that likes DMAA.

The next time I use it I may bump it up to 100mg and mix in a little preworkout and see what kind of synergistic effect I can get.

Fucking fantastic! I bumped the dosage up to about 100mg mixed with some BCAAs. I didn't mix in any other preworkout stimulants this time. I'm almost kind of scared of how much I like this stuff. The mind-muscle connection was unreal today. I wasn't fixated on work or things I still have to do afterwards. Just me and these iron plates. Set a couple of PRs too.

I'm going to cycle this stuff. One week on, one week off.

Member
I really liked DMAA in Oxy-Elite Pro. But alot of Hi-tech's stuff is shady and left a bad impression. Tried their Lipodrene which has a hefty bit of DMAA combined with Ephedra Extract and thought my heart was going to explode. Only product I did like that's currently sold is the APS Mesomorph. I mixed half a scoop of that with a scoop of Pre-Kaged and I could see sounds in the gym for 45 minutes.

Might wait for more research until I try the successor.

Sent from my SM-G900V using Tapatalk
You must log in or register to reply here.

A Primer On Peptides: What They Are And Why To Take Them

Ghrelin: The ?Hunger Hormone? Explained (by here at P.S.L)

🛑READ🛑 YK11 is a SARM and myostatin inhibitor in one! "Astounding"