Super Moderator
Muscle and bodybuilding in general doesn’t come easily. It takes several hours of work without even a whiff of any result. A lot of people struggle to keep up with these demands to be able to build their muscles to the required state. This has led to people researching products and drugs that can help them achieve their goal. The first point of call was steroids but this proved to be inadequate and unacceptable as it had undesirable side effects such as liver damage.
In the search for something effective and safe, SARM was discovered. Researchers observed that SARM aided bone and muscle development. This made body and muscle builders explore its possibilities.It has now gained a lot popularity since it first came on the scene.

Selective Androgen Receptor Modulators, called SARMs for short, are androgen receptor molecules that are designed to do the same job that androgenic drugs are used for.They are however more precise in the way they work. This property makes them applicable in a wider capacity than anabolic steroids.
SARMs gives you benefits and results associated with steroids but without the side effects. One popular brand of this new breakthrough is ACP-105. 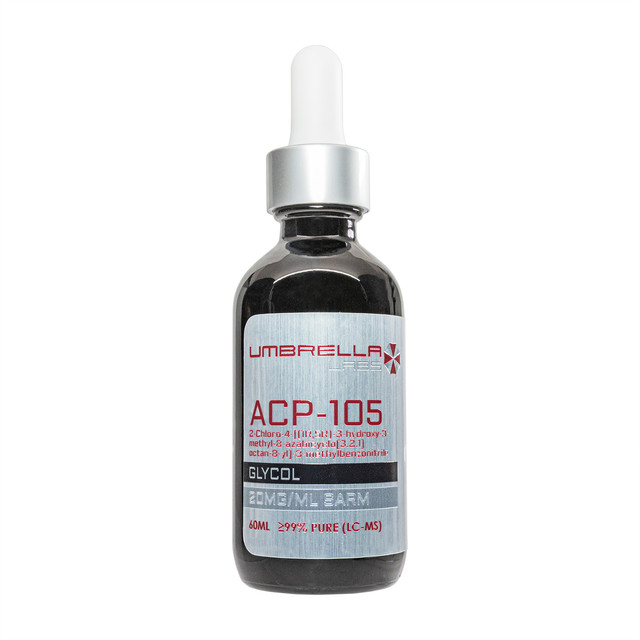 Acadia (the company that produced this SARM) proposes that ACP-105 is as potent as Testosterone in in vitro assays without interaction at other hormone receptors. In addition, ACP-105 demonstrates potent anabolic effects on muscle and bone with minimal effect on prostate in preclinical models (hence it being a genuine SARM).

ACP-105 was created to help as a treatment for patients undergoing degenerative bone disorders. It was used for disorders such as arthritis and osteoporosis. It was designed to offer a safer alternative to anabolic androgen steroids and prohormones. It binds to androgen receptors found in the bone tissue and also in the muscles. Because of its strong anabolic effects, it is comparable to testosterone but it is much safer. Using it is a safe way of gaining lean muscle, strength and endurance surprisingly without any serious side effects.
The potency of ACP-105 cannot at this moment be discussed with absolute certainty. It is said to have an androgenic to anabolic ratio of 1:3. Studies and research carried out on animals show that its activity is comparable to testosterone but there is not enough information to prove how strong it is. Because ACP is a partial agonist, its suppression is very minimal and not as suppressive as other SARMs like RAD-140.
This does not mean you won’t need a post cycle therapy (PCT). After using ACP-105 for a while, there will be slight suppression which would require a small pct.

ACP works by acting the same way testosterone does. It binds with each androgen receptor in a selective manner and works uniquely on them which enables it to do its work without bringing about any damages to important organs. It reduces Lipoproteins which are the high-density and increases the non-fat mass which then makes a person grow muscles without getting obese. An absence of aromatization ensures the estrogen levels do not rise so water is not retained.

ACP stops the negative transmission from the hypothalamic-pituitary-adrenal axis which increases the testosterone levels. When used for long periods, it disrupts normal hormonal balance causing testosterone suppression. This can be resolved by a post cycle therapy. With all these, it helps to achieve growth of muscles and at the same time helps you to maintain a healthy body. If you intend to use or research this drug, be sure to get it from a legitimate source.

Being a partial agonist, ACP-105 may not be as strong or potent as other SARMs.It however comes with a truckload of benefits. Some of these are listed below.


It helps to get rid of abnormal fat in the body by utilizing and burning off the fat.
It aids muscle growth while preventing muscle wasting which is a characteristic that makes it useful in curing bone disorders like osteoporosis.
It aids quick recovery from injuries and exhaustion.
It increases the Androgenic Receptor levels in the hippocampus region, enhancing cognitive skills and the memory.
It provides the body with energy and strength for endurance so you do not get easily tired.
It can be used as a potential cure for prostate cancer, breast cancer, and cachexia.
It yields results in a relatively short period.
It is safer than androgenic anabolic steroids.

One study in particular assessed the effects of the SARM ACP-105 on rotorod performance, which is essentially a performance test used to assess speed, endurance, balance, strength and motor coordination.

Now, the study also involved exposure to radiation and was actually intended to see if mice that were administered ACP-105 would undergo the same degradation of rotorod performance as mice that weren’t on the SARM.

The findings revealed that ACP-105 may offer protection against the effects of radiation, which is great and all, but the key thing to pull from this study is that ACP-105 was the main factor that offset the degradation of rotorod performance, hence we can assume that ACP-105 treatment might contribute to overall increased speed, endurance, balance, strength and/or motor coordination.

Super Moderator
Side Effects of ACP

Some side effects that have been associated with ACP include:
– Mild headache which usually occurs at the start of using the product but recedes as you continue to use it. Using a higher dosage than recommended can result in constant headaches.
– Suppression of the testosterone levels after usage for about 6-8 weeks. This can lead to fatigue and nausea. Taking a PCT helps to correct this.

Note that none of these side effects is permanent and can be easily reversed.

How Suppressive Is ACP-105?
ACP-105 is a partial agonist; meanwhile LGD-4033 is a full agonist (using this comparison as LGD-4033 has a lot of supporting data to compare to).

Full agonists induce greater levels of suppression, but are more potent (based on the information presented).

With ACP-105 in particular, being a partial agonist it would result in less suppression, although it will also likely be weaker than LGD-4033 on a mg:mg comparison.

Raising the dose could make it formidable to heavy hitters like LGD-4033, but referring back to the anabolic:androgenic rating of ACP-105 (3.19:1), we can assume that the higher the dose, the greater the chance of suppression and androgenic side effects.

This may still be minimal though, even at higher dosages, as ACP-105 appears to have a much less significant effect on prostate size than Testosterone and DHT.

Based on the data provided, we can assume that a higher dose of ACP-105 may yield effects formidable to that of Testosterone, with a very minimal presence of negative androgenic side effects.

So, perhaps there is a threshold dosage where one could achieve a stronger anabolic effect than something like S4 or maybe even LGD-4033 but with less suppression, but this remains to be seen as more data emerges.

What is the Recommended Dosage?

The studies done on ACP-105 suggest that the human equivalent for the study using 1 mg/kg per day for a man weighing about 175 pounds would be about 11 mg per day.

Obviously equating this to some efficacious dosage where there would be minimal/no side effects for human use is impossible to do without some sort of experimentation being done, and as of now there are no clinical trials done on humans.

The consensus seems to suggest that a reasonable starting dosage is around 11-12mg per day for human research trials.

With research of many user feedback, a dosing of 10-20 mg per day is what seems to be the safest and most effective method of dosing.

Most users of ACP have reported satisfactory results with increased strength, improvement in endurance and muscle gains. ACP-105 is formidable to some of the less suppressive/still effective mainstream SARMs (like Ostarine) from the data we have gathered, but the main appeal of it is that there should be significantly less androgenic activity than several of the stronger SARMs, hence less undesirable side effects.

VIP Moderator
Much needed topic to cover! Thank you!

Super Moderator
Member
Thank you so much for all the time and effort you are putting into this amazing content!

VIP Moderator
this is one that needs to be looked at close, looks interesting

Member
bro gonna look into this one, sound good

VIP Moderator
Really interesting compound here with some nice benefits. A great option for those who are looking for less suppressive compounds.

VIP Moderator
Nice info and explanation on this. Im curious to see feedback on this one

Member
I’ll be using this in my next cut!
You must log in or register to reply here.