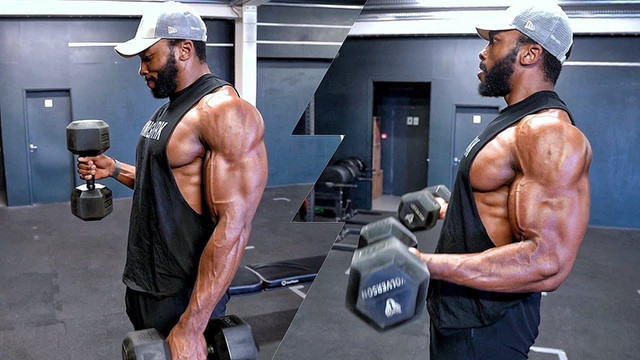 Not seeing the progress you want in your biceps and triceps? The reason could be simpler than you might think. Here I’ll share five possible reasons that might explain why you’re not seeing the gains you’ve been working towards in your arms.

A frequent assumption is that you can effectively train your biceps and triceps by solely performing complex movements in a standard push/pull split, but this is unlikely to be enough if your aim is muscle growth. That might not be the greatest technique because you're not getting enough direct arm volume to grow them to their full potential.

Instead, I propose including exercises like standing dumbbell curls, spider curls, waiter curls, overhead extensions, and cobra pushups in your workouts that target those muscles. The added volume not only aids in the development of larger biceps and triceps, but it also looks better.

NOT UTILIZING THE STRENGTH CURVE

A barbell curl, for example, is most difficult in the midst of the action, while a spider curl puts the most tension on the biceps at the top: practicing both of these will fill in the strength "gap" and hit both the short and long heads of the biceps.

Progressive overload, at its most basic level, entails gradually increasing the weight of an exercise in order to improve strength over time. But that's not all it means. Arm workouts don't allow you to simply add weight to them. When was the last time you boosted your standing dumbbell curl by more than 5 pounds?

Technique, rather than load, is a more realistic strategy to enhance overload on arm day. For example, execute a set to failure, then lower the weight and repeat the exercise to failure. Mechanical dropsets, on the other hand, allow you to keep executing reps of the same exercise at the same weight after you've reached failure by simply transitioning to a more efficient posture or variation.

YOU’RE NOT CONTRACTING YOUR MUSCLES EFFECTIVELY

When completing a curl, it's not enough to simply move the weight through space; you must also contract it through space. Of course, your arm contracts to get you into that posture, but your biceps should also contract. Flex it as though you've just been told to develop a muscle, and the hardest muscle you've ever made is required... Do it again, but this time with a weight in your hand.

LIFTING TOO HEAVY… OR TOO LIGHT

You don't have to choose between the two; you have to do both. It's important to mix in heavier weights from time to time, even if it's only for 3, 4, 5, or 6 reps. This will help to stimulate growth. I also recommend using heavier weights for "cheat" versions, like as the cheat curl, which adds momentum to the movement and allows you to execute more eccentrically overloaded reps.

Member
bro my arms bigger then this dude

If you have a big bench or overhead press you'll have thick arms. So for sheer size (first and foremost what most want) you DO need to do compounds.

Yes you can do shaping exercises. But who wants a well shaped 12-inch arm... women maybe.

Key is to either lift a ton or cheat as little as possible. Ideally both.

Look at what the owner of possibly the best triceps ever (Roelly Winklaar) does - 50lb kickbacks done strictly.
You must log in or register to reply here.

Napsgear: Why You Should Never Neglect Your Obliques

Grow Your Guns By Incorporating These 5 Exercises

Napsgear: 5 Extremely Underrated Arm Exercises That You Should Be Doing

Napsgear: 5 Extremely Underrated Arm Exercises That You Should Be Doing